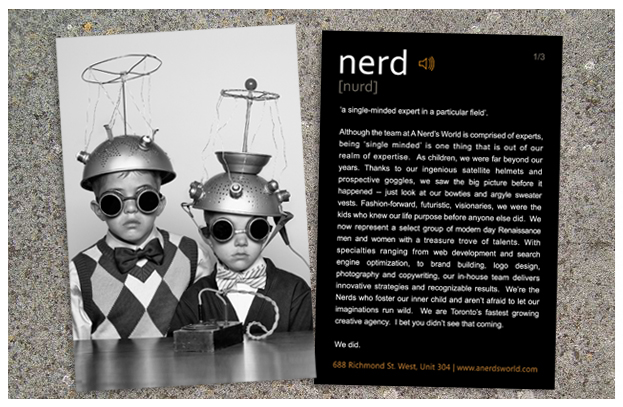 It was dark and stormy night. Okay, maybe not, however, we were definitely working into the wee hours at A Nerd’s World Headquarters. Just when we thought we were about to lose steam, Chris Hughes was overcome with inspiration and exclaimed “How creative do you feel tonight?!” The rest is history, or rather, will go down in history. This was the birth of our latest print campaign which includes over 1,500 posters and 30,000 flyers, to be plastered and distributed by hand throughout the GTA over the next ten days. One might ask why we, a Toronto web development firm that specializes in digital marketing tools such as SEO would choose to launch a print campaign?

Let’s forgo the statistics of print advertising for now and go with Nerdy empirical evidence – this method of marketing has always been a strong component of ad campaigns. Although the digital landscape has evolved substantially over the past decade, the notion of a tangible, printed advertisement is familiar, nostalgic and even comforting for some. If you’re like me, you’ve held on to a flyer from a memorable party or even clipped images from magazines. They could have ended up in a shoebox, on your fridge or collaged as part of some Pinterest project. Point being is that we’ve held on to it and it wasn’t placed in some metaphorical spam folder. By nature, humans are responsive to tactile stimulation and on an iPad, Kim Kardashian’s latest Tweet feels exactly the same as an email offer from Domino’s Pizza – neither of which do anything for my fingertips.

Printed collateral gives brands that extra boost they need to catch the attention of a consumer who will make the connection between it, and an online advertisement. A memorable logo or font on print that is consistent with one seen in a digital format establishes brand recognition. Print also acts as additional support for ads in other channels, giving a sense of credibility which makes your brand more reputable.

People are more engaged when reading something in print and in addition to the adverse effect of banner blindness, are more likely to read articles and advertisements faster, and in their entirety than they would on a screen. This adds to engagement through distribution, which in our case would be by hand. So over the next ten days, keep an eye out for your local Nerd and be sure to snag one of our limited edition flyers – there are only 30,000 of them of course. We’re a friendly bunch who are always up for a quick chat while we pound the pavement as proof that there are real Nerds behind all the work we do.

For those people who are all about the numbers, despite the decline in print campaign expenditures, ROI for print media is still a leader among other media channels. A decline in print advertising means less competition. You can do the math there.